lt has been shown that the terrestric background-radiation includes also neutrons. A source is for example uranium with a content of 2 ppm in the earth crust /1/. The radioactive processes emit neutrons with velocities of about 20.000 km/s. They have a high penetration ability and reach partially thermalised the biosphere.

In structure geology it is known that especially in connection with granitic plutons the earth crust contains many systems of cracks /2/. In a crack system there are striking parallel crack structures which obvious are extending deep in the crust. You can see the orthogonal, the diagonal and otherwise oriented crack systems in quarries.

I have made some dose measurements of neutrons in the measuring range from a minimum of 0,1 µSv/h at energies up to 10 MeV with a sensibility of 3,15 counts/nSv (at 3 MeV) and have obtained in the course of the work that the neutrons occure in special alignments of parallel linear structures. The width of a single structure is not more than a few cm. The dose is twice to eight times in comparison with surroundings.

A similar phenomenon of radiation structure ist well known for planar multimode light wave guides /3/. If we understand the incoming neutrons from the depth of the earth crust as guided waves (modes) between two cracks then every of the effects by the author observed may be brought into line. Two parallel earth cracks with neutron waves guided between would be therefore terrestric multimode neutron wave guides those are acting on the biosphere (Fig. 1).

The origin of author's investigations were observations in nature about the very constructive (high growth rate and vitality) and often simultaneous extremely destructive state (for example extreme deviations from the standard tree shape) of single or solitaire trees. The author's further investigations delivered a relation between neutron structures in the range of earth surface and the state of the trees. The author expresses this phenomenon as neutronotropy.

In accordance with the physical properties especially of the slow neutrons the immobile living beings obviously had only very limited possibilities to adapt in the process of evolution. In any case there are many examples of extremely destructive effects on trees and other plants.

Alone the existence of several not parallel crack Systems let us conclude that the terrestric neutron wave guides can cross each other star-shaped in one point. The author pointed out that this crack-star may be the position of a solitar tree. The more active double cracks cross this crack-star the more constructive is the position but the more destructive it also may be for a tree there growing (Fig. 2). With consideration of the author' s models it is obvious that already the dose distribution of the neutrons on such a position can partially explain simultaneously its constructive and its destructive growth potential. 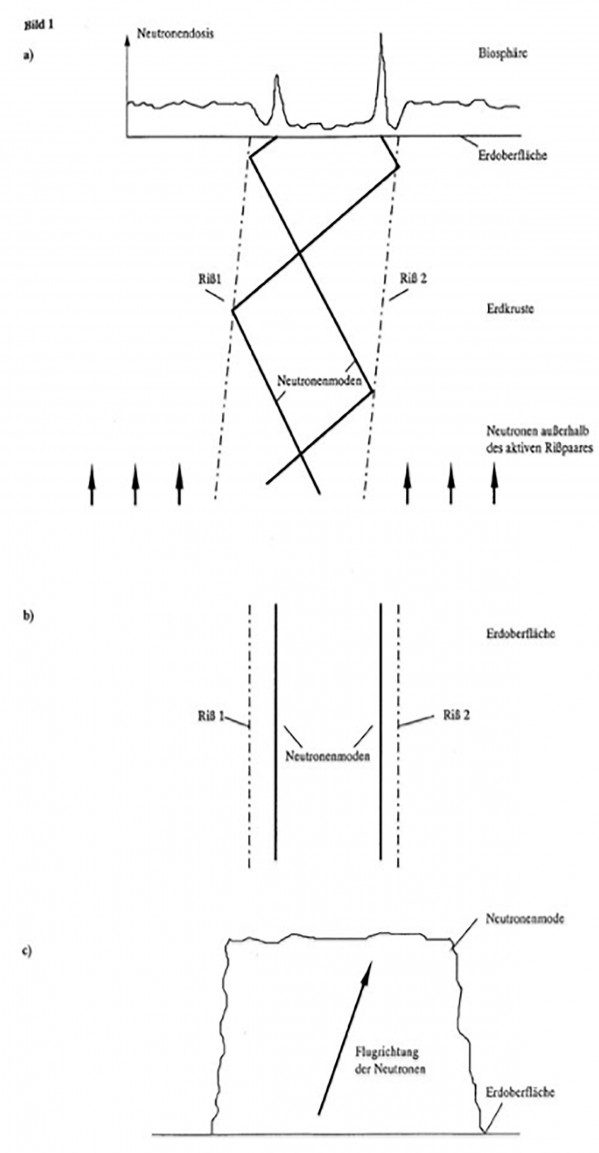 c) Side-view perpendicular to the crack planes: The flying direction of neutrons (arrow) in the plane of mode common is inclined.

Figure 2: The radiestetis "geophysical place" of the Great Oak of Ivenack.
2a) The stem diameter of this gigantic tree is 3,50 m and it is 10 degrees inclined.

2b) In top-view of geological Situation and tree position are shown as dash-doted lines of 8 crack pairs crossing star-shaped here (radiestetic result).

2c) The schematic scaled representation of radiestetic "neutron modes" as short fat lines shows their position relative to the tree and across to the radiestetic "crack pairs". The arrows indicate the direction of stem inclination.